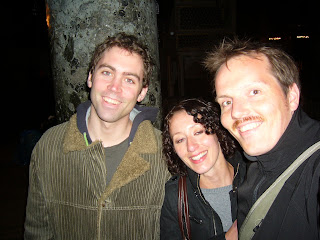 Just a short update, since I'm nearly passing out in need of sleep... Turkish Airlines was OK - they had alright seats (except the turquoise color) with individual media centers and had a good choice of food and drinks. However, the crew was rather unpleasant, which pulls down my rating.

We made it to the hotel on time (11 pm), but Olav had gone to bed early with the flu, so we chilled in the jazz bar of the hotel for a little while and went to bed. I had trouble sleeping long, so I got up, out, and about to catch the sunrise. A nice taxi driver drove me out along the Bosporous Straight, and let me off somewhere near the bridge north of Bosporous Bridge, where a restaurant owner and his companion wondered what I was doing walking aimlessly around in the rain. They invited me inside even though they didn't open until 8 (almost 1.5 hours later), and we had a chat over three cups of tea and breakfast. Four policemen popped by as well, and when I was leaving, they refused to let me pay. I took the dolmus/bus back to Taksim Square and the hotel.

Olav, Astrid, and I had lunch before window shopping at a mall, and then we paid a visit to one of the seven wonders of the world; Hagia Sophia. It was really amazing. Read about the 1500 year-old cathedral/mosque in Wikipedia...

At the end of the day, we went back to the hotel and played Red Alert 3 until midnight :-)
Posted by Skybert at 23:15