Throw out trash? Check. Find charger? Check. Do a whole bunch of other stuff I should've done? Check. Pack? Astrid did that. OK, we're ready to go! 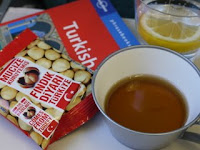 Actually, the departure was painless. It kind of stings you in the eye, though, when you board a Turkish Airways flight, and are overwhelmed by azure seats and blonde non-blondes who do their best to smile while all they want to do is to bite your head off. In a nice way. Here's a good example: I ordered Efes with my meal, and was met with "We're out of Efes! And Tuborg! The Norwegians drank all the beer! Why do all Norwegians drink so much beer?". We were sitting in row 15, halfway down the aircraft… After trying to joke about our viking past, I order a minuscule bottle of cabernet sauvignon and a GT, which makes her eyeball me and go "What? Both wine and GT?" Well, Astrid had a point in Norwegians often drinking too much, so we just smiled and waited for the coffee. When served, stupid me tried to make a joke again, and ordered coffee with Irish cream. She probably thought I was being a pita, and said "Are you trying to MEAN something to me?" And I was not, so I shut up.

After a race in a taxi styled up with alligator imitation seats, we arrived in the Fatih borough, which is the honorable old town Istanbul, in walking distance from the Blue Mosque, Hagia Sofia, and the Grand Bazaar. We'll stay here until it's time to fly East.
Posted by Skybert at 18:00