First, a little announcement: Our little boy or girl is 27 weeks on his or her way to the world today! Yea!!! And then...

Respect-for-the-Aged Day (敬老の日 Keirō no hi) is a Japanese holiday celebrated annually to honor elderly citizens.[1] A national holiday since 1966, this used to be held on September 15. Beginning in 2003, Respect for the Aged Day is held on the third Monday of September due to the Happy Monday System. 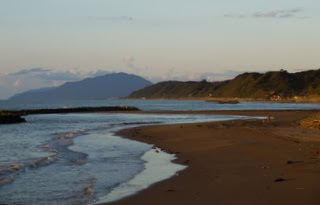 This is a shot from a beach near Niigata. 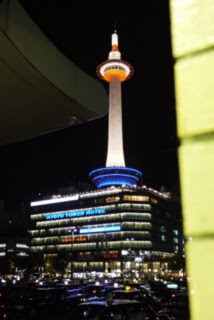 So, we're in Kyoto, staying at a Ryokan. Here's everything you need to know about staying in one. It's a Japanese-style hotel where you have to take your shoes off whenentering and step into slippers which they provide. The slippers can be left outside the room, or in the corner by the door in the room, which is covered by mats made out of woven rice straw. There's a really low table with a tea pot and some cups in a little box, some oblong futons made up to sleep on, and a few pillows to sit on near the table. There's normally air conditioning and a TV, and this room has a wired internet connection. The bathroom is equipped with bathroom slippers, a deep bath tub with a shower, soap, and a regular
toilet. The windows are covered by rice paper framed by wooden squares. In the room, there's cotton robes provided for wearing in and around the hotel. 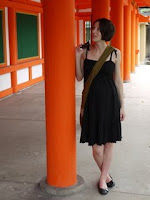 We visited the national treasures of the Sanjusangen-do temple and biked around town today. It was nice.

We decided to go to the cinema and see a movie with English soundtrack or subtitles. The cashier mistook "original soundtrack" for "English soundtrack", so we ended up having an entire movie theater to ourselves, with deep love seats, which could have been great, hadn't it been for Korean soundtrack and Japanese subtitles. Maybe we'll see The Secret some other time. 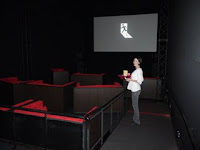 I read that it'll cost you about 10 USD per head to enter the Kyoto Tower. If you'd like to see a panoramic view of the city for free, just take the most awesome escalators to the top of Kyoto Station, and pick up some scrumptious donuts on the way up - or grab something else to eat or drink in one of the restaurants in floors 1 through 12. Once up, cuddle in the little park area on top :-)
Posted by Skybert at 23:35

I've been there. the old capital
city of Japan 5 years ago.
I really wanted to stay japanes syle hotel, but I didn't.
Wow you are very close to me.

how can I delete my first comment?
It looks foolish

Your pictures are beautiful! And it is very interesting following you on your exiting journey.

Astrid, you really travel with style. I love the picture of you with the dress and the orange colors in the background. Both of you have a good eye for nice pictures!