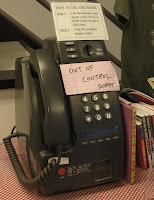 Or south, maybe. Wow, it's 6 AM right now, and all of a sudden, fireworks are being shot! It's September 17th, which might mean something. Let's see...We don't know. Wednesday was respect for the elders day, but maybe it was just a thank God it's Friday celebration.

This crazy phone is on display down in the reception. I couldn't resist taking a picture of it before reporting it, and the staff quickly realized that "out of order" would be the proper way of labeling the phone, so this one is now history. We've got more, though :-)

It's important to note that Astrid and I are not the only ones on this trip. Astrid is carrying a little passenger who seems to be getting more active each day. Yesterday, he/she kicked, or rather pushed so hard that her stomach had a substantial bump for a second! That made our day :-)

Before leaving Nikko, we had to try their local specialty; shaved natural ice. As a matter of fact, it was delicious. Maybe because of the source, which is spring water and special preparation of the ice blocks themselves, but mostly because they put blueberries in Astrid's portion and strawberries in Anders'. 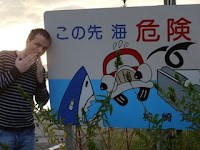 Anders had decided it was time to go to the beach, so we went straight through Japan, right on, northwestwards, until we had to turn left at the Sea of Japan. All of a sudden, we were amidst picturesque villages and abundant sandy beaches. Everything was closed, though, since the short Japanese summer holidays leave the beach resorts as ghost towns even in warm September. Darkness was descending upon us, so we had to find somewhere to stay, and fast. We were pointed in the direction of a Japanese-style hotel, a ryokan. And not only was it a traditional kind of hotel, it was also an onset! That means it has warm baths… After a quick guidance as to how to unpack the beds, find the bath robes (which you can wear everywhere and anytime in the ryokan), and change shoes at the proper places, we jumped in the water while some elves mysteriously made up our beds (freely plagiarizing Lonely Planet, which did not mention this part of Japan with one word) and had a wonderful sushi and fried fish supper. We made plenty of mistakes, but learned a lot! Here's their home page: http://www.h-sumiyoshiya.no