We turned 180 degrees and set sails for Kyoto, planning to be there on Sunday, maybe. On the way through beach land, which is about an hour north of Nagano (remember the Olympics?), we passed through a number of friendly towns, including one which had a museum for children on nuclear power: Atomuseum.

Anders finally had his wish come true: A swim in the ocean! Unfortunately, there were jellyfish, and after getting stung twice, sunbathing seemed like a better choice. Some of you have postcards coming. 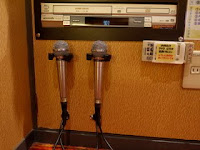 At the end of the day, we stopped in the city Kanazawa. The hotel we chose from the GPS was full, and so was one close by, so we took a right and a left and who knows what and picked a hotel that looked like a… hotel. It turns out this is a LOVE HOTEL! We probably would never have picked one in the first place, but we can absolutely recommend it. It might on the high side, pricewise, at 16000 yen for a night, but it's great fun. (Problem was - the hotel did not accept OUR Visa - debit nor credit - or MasterCard, and after one our of roaming the neighborhood, Anders gave up finding an ATM that would. Coming back to the room, sorry to say that we'd have to leave, it turned out Astrid had dug out exactly 16400 yen - enough for the room and two drinks! No dinner.) Our room looks kind of… crazy! It has a little doll house with an animal family (think Hello Kitty), TV in the bathroom, a toilet which not only gives you a squirt, but also has a drier, karaoke, and a lot of other things in all the colors of the rainbow. The name of the place is Aine or http://www.aineworld.co.jp As always, the staff was very friendly and understanding, and we managed to have a conversation in English :-)
Posted by Skybert at 14:11