There are a couple of striking differences between Istanbul and Tokyo. First, Tokyo is tidy. There are no garbage cans, but the streets are spotless. It looks like everything has a designated space for it, and nothing is out of order. The people are neat, and structured. You don't need anyone telling you that you have to stand on the left side and walk to the right when riding the escalator - you will stand out in the crowd if you don't. Also, people are nice and polite. Even though we don't speak much japanese:) 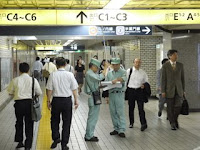 We arrived yesterday around noon and took the slow train to the city. We checked in at the hotel to find the smallest room we've ever seen (with one possible exception). Today, we walked to the Imperial Palace, which is close to the hotel. It was closed on Mondays, but we had a nice walk down to the shopping district Ginza. We spent the afternoon strolling through huge department stores and chic stores.

We have seen some interesting signs here as well. Our favorite in China was the sign in a museum describing an item as "A jar with pricks all over". Our favorite so far in Tokyo is " No smoking all over the toilet", followed by "Once the fire alarm in the toilet has functioned, a guard will rush to the site and check it out".

Today, we are in the 26th week, which is kind of nice. When coming home, we will be in the third trimester.
Posted by Skybert at 15:21

Nice to read that you are doing well :-)